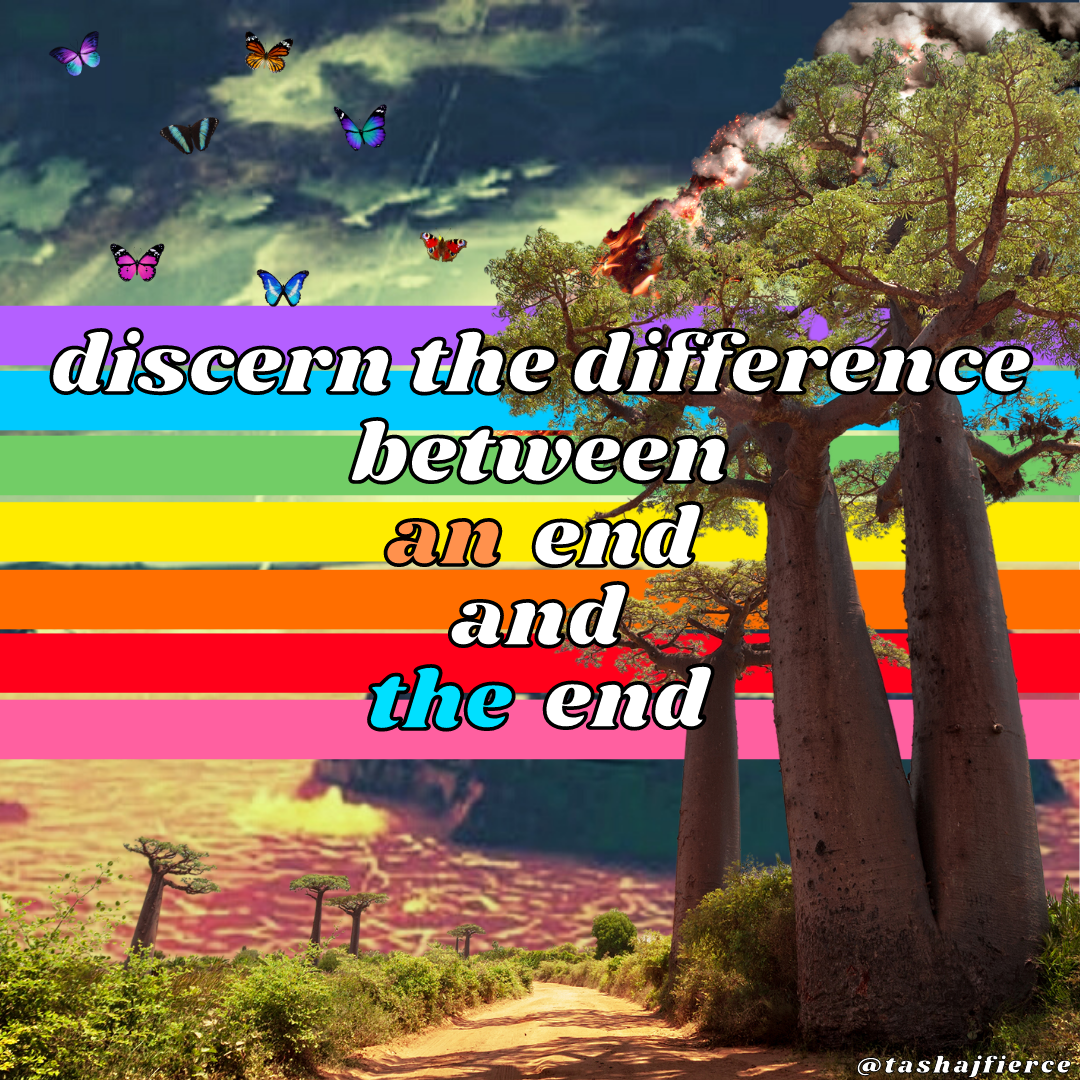 This moment in time feels like The End for a lot of us. The myriad crises we are facing—white supremacist fascism, climate chaos, ever-mounting COVID-19 deaths and infections —loom apocalyptic, cataclysmic.

Every day is a universe unto itself, yet somehow we string them together, continue putting one foot in front of the other on the long march towards what feels like an ultimate doom.

I want to honor the reality and gravity of our collective situation. We haven’t taken nearly enough space for grief, for feeling these tectonic shifts in ourselves and our human-made world.

A huge chunk of our population has fallen ill and perished within a few months. Black maGes continue to be murdered by police and intimate partners, strangers, anyone. Our country seems on the brink of civil war. For those folks who have died, who will die, this moment is The End.

But for the rest of us, it is not. It is An End. There is a distinct difference.

An End for my personal world has looked like memories of childhood rape flooding back to me in the middle of a school assembly at ten years old.

An End, for me, has also looked like courting The End by swallowing enough pills to kill me multiple times, and being forcibly incarcerated in psychiatric facilities as punishment.

My world has been shattered and remade multiple times, like the Earth in its infancy. And like the Earth, I am continually changing, unfinished. I will meet An End again, just as surely as another cataclysmic meteor will hit this planet in the next billion years.

But: until I die, until The End, I can shift course. I can grow.

Our human-made world is in the middle of An End that could very well evolve into The End of our species if we do not change course. But for now, we are, gracefully or not so, inhabiting the space of An End. And that space is full of so much promise.

Because after An End, there is A Beginning.

Beginnings are difficult times, messy times, but they are hopeful. We have survived a brush with The End. The possibilities for our lives seem endless.

Beginning anything, any new way of living, requires care and cultivation. There will be missteps & stumbles. Sometimes we might seem to go backwards, looping like eddies in a temporal river.

We can look to the rocks below our feet for reassurance.

For eons, the infant Earth was bombarded with debris from the still-coalescing solar system. Our moon was carved from the Earth’s flesh by a direct hit from another baby planet. After the Earth re-formed itself, it was tilted on its axis, but still here.

(Do you know that feeling?)

Our planet has nurtured life and then watched it nearly die off. It has frozen over and thawed, taken multiple asteroids to the chin, and endured millenia-long volcanic eruptions. Whole worlds have ended and begun anew.

And after all that upheaval? We are here, today, enjoying this world, this Earth, this beauty. Snow-capped mountains and savannahs and rainforests and glaciers. The expansive ocean. Our pockmarked moon at its fullest.

When I feel my anxiety rising, when I am depressed by the weight of human and non-human suffering and death, I allow myself to feel it. I cry as if I am an expression of collective grief.

Then, I situate myself in deep time. Geologic time. The scale at which the earth moves. I remind myself that this is not The End of The World, it is An End of This World.

And we can still shape A Beginning.

A question of time

Where are you allowing the false urgency of consensus reality to overwhelm your senses?

How can you place yourself or humanity in a broader context (i.e., deep time) to let some pressure off?

Why are you convinced that the past should be past? Who taught you the future must remain forever out of today’s reach?

How might allowing yourself to live within a better future today make it more possible for us to achieve collectively?